The Worst Car I Ever Owned.

Good lord, there were so many. Perhaps, though, was my 1962 Winter Beater, a 49 Buick Roadmasher. Like this: 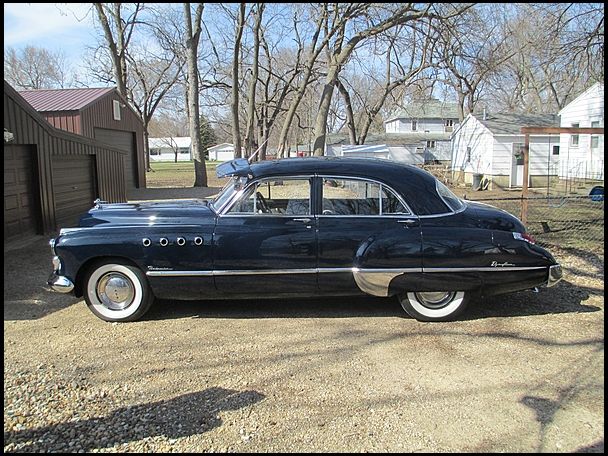 Rather than have my nice Plymouth Fury suffer death by rust, I wanted a beater as most of my Minnesota friends with decent cars had winter beaters. So I went looking. Well sure enough, a Lake Street car lot had just the ticket.

It had a straight eight with diarrhea drive, power nothing and an ugly mohair interior that stank of mildew and mold.  But it started in twenty-five below zero weather and plowed the snow like crazy.

Pull the little penis-like shifter into “D” and mash the foot-feed and the Fireball 8 would let out with a low buzzing hiss and it would lumber away at a crawl. Pull it into “L” with the throttle wide open and there would be a jarring bang as it geared down — but the acceleration did not improve.

One evening, I went around a corner and instead of feeding the wheel back through my hands, I just let it go as I yanked it into “L” and floored it. The wheel returned to the straight ahead position but Jesus, Mary and Joseph – it kept on going. Now the piece of shit was heading into the oncoming lane so I backed off and the damned thing started to correct itself. But wanting to see what would happen, I floored it again while it was still correcting and damned if the old thing over-corrected again, but to the right this time.

I found out that if I kept getting on and off the throttle after rounding a corner, the lurching would become worse and worse until it almost went off the road. I had fun entertaining my chums as the old monster went down the street.  Weaving drunkenly from side to side, my chums hooted and hollered and slapped their legs in merry mirth.

But what really made it the worst car I ever owned was it tried to kill me and my young lady friend.

Being a Minnesota car, it too had rusted way out. Part of the rust was an opening through the rear wheel well into the cab, and in that rusted wheel well was the tail pipe which had itself rusted off as it came up over the rear end. An almost-direct exhaust leak into the cab. It was a gas chamber. Did I know this? No, because I always kept a window open to let out the cigarette smoke.

So this one cold and snowy night, my lady friend and I were parked in her driveway and had been there for a while with the Fireball 8 running to keep us warm (after all, we had no clothes on so warmth was appreciated). The radio was tuned to Hobbs House, a program heavy on the torch songs, and I was about to take a post-coitus nap, when my lady friend said, “I feel so dizzy!”

It took no more than a few seconds to understand we were about to die from carbon monoxide poisoning right there in her driveway with our genitals exposed to the coroner. Oh Christ. I had enough presence of mind to kill the engine and, with pants down around my shoes, crawled around in the icy cold driveway, through the snow, to reach her door. I somehow managed to get it open and drag her out. She was as red as a radish.

I got a lot of snow on her bare parts to bring her around and then we re-assembled our clothing and went on inside. It took her awhile to come to.

Later, on the way back home I had all the windows down and the fan full-on because the smell of car exhaust made me violently ill. Drive a few blocks. Spew. Drive a few more. Spew again.

The old Buick sat out front until Spring when I drove it to the nearest car lot and got rid of it.  (ED)

This entry was posted on Wednesday, December 13th, 2017 at 07:36 and is filed under Uncategorized. You can follow any responses to this entry through the RSS 2.0 feed. You can leave a response, or trackback from your own site.