Prediction – China and the USA

China will continue to eat Uncle SAM’s lunch. Through stupidity, avarice or treason, America gutted its industries via off-shoring to China and sat on its ass while our intellectual property was plundered by the People’s Army. Also, considering that for every one (1) American there are four (4) Chinese, the USA will end up sucking the hind tit. As the 20th Century was America’s, the 21st will be China’s.

The American experience failed the day the toadies on the Supreme Court placed Bush in the White House. Today, ignorance, religiosity and scurrility rule the land with an undreamed-of viciousness.

We will sink below the waves and become another has-been country ruled by an idiot.

Still the battle rages.  Even with the vast wealth of this vast country, we still are blighted by disease that are disabling, painful and the cause of untimely death, we still quibble over who should be saved and who should be doomed.

Many Republicans and Libertarians chant the mantra, “I don’t want my hard earned money paying for other people’s health care”.  Many Democrats and Liberals say, “Why not?  I’ve paid for other peoples’ health care before and others have paid for mine”.  These two positions are mutually exclusive.  Only one of these philosophies can be right so the other must be wrong.

Before going on, let me toot my own horn a bit, lest you think I’m simply a layabout looking after myself.   I’m seventy-six.  I still work, though part-time, as I found idleness promotes decay.  Jo, has part-time job too.  For income we’ve got those two jobs plus Medicare and Social Security; the former is an evil entitlement the later is a whole-life insurance policy run by Uncle Sam instead of Met Life.  I also play Santa Claus.  All-in-all, we don’t do too badly.

According to the Christorepublican’s and Libertarians, if you have lived right, you will be free of disease.  You’ll eventually expire, yes, but of something quick, painless and cheap — heart attack, stroke, burst aorta . . .  things like that.  It’s only those who are slackers, ne`re-do-wells, spendthrifts, idlers, and fornicators — sinners — who are smitten by grody illnesses.  I have cancer, am I a sinner?  You tell me.  In my work, I help developmentally disabled adults get out into the world.  I take them places and help them become a part of the greater world.  If it weren’t for me and other’s like me, these poor devils would be shut away.  For over twenty years I was a Volunteer Guardian ad Litem, (aka, CASA – google it).  I do other nice things too.  Jo volunteers at an animal welfare agency.  Jo and I actually took in a homeless Vied Nam vet who lived with us and with whom we broke bred for over a month (there’s a post about that earlier in this blog).  Are Jo and I sinners ?  Obviously not.  The idea that sin = illness is spurious, specious and hypocritical.  A perfect example is the good Christorepublican Congressman who publicly denounced the sick among us as deserving their illnesses because they are, at heart, sinners.  They are bad.  God doesn’t like them.  Ah, but a few weeks later, the miserable son-of-a-bitch announced he has prostate cancer.  Neener, neener, neener.

See this Image?  It’s a PET scan of my internal workings. It’s called a Prostate Specific Membrane Antigen (PSMA) scan and it looks for metastases  (https://www.ncbi.nlm.nih.gov/pmc/articles/PMC5439210/) 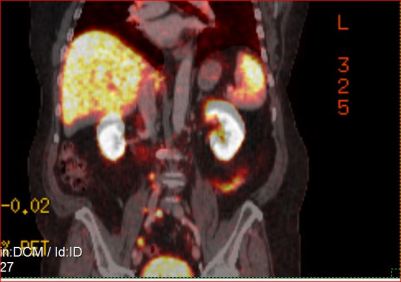 See those bright red things going up my spine?  Those are metastases.  Now, instead of having just one tumor (the bright hemispherical thing at the bottom) I now have seven.  Metastases are the things that kill you.

It’s Stage 4 cancer.  given the state-of-the-art, Stage 4 is incurable though it’s treatable. Consequently, my oncologist put me on a medication named Zytiga.  I’ve been on it for just a year and as of last October, my PSA level is undetectable.  This is cancer we’re talking about so eventually the cancer adapts and the Zytiga and will stop working.  Unless my doctor has something else in his quiver of arrows, I’ll just get a prescription for painkillers then it’s off to home and bed.

So, knowing this, and knowing I wallow in sin, as indicated by my non-wealthy status, should I get treatment?  Or should treatment be reserved for the likes of Jeff Bezos and that shit-ass Christorepublican Congressman?  And hey, what about you?  Can you, in your current circumstances, take a hit like this?

Here are the retail for the treatments I’m getting at the present time:

Since the year ago this month, my cancer treatment has cost about $98,200 and will cost about the same until I croak.

Can you stand a hit like this?  Well sure, if you’ve got some really swell insurance and are not really poor, i.e., you can write the check out of the smalls. But how about the “sinners” like the fellow who pumps your septic tank, the roofer, the fellow who fixes your car’s transmission, the intern at a law office or the grocery clerk . . .?   Their pay is shit and most of their employers don’t provide insurance at all and if they do, the policies often have puny caps and horrid co-pays.  Oh, and lots and lots of restrictions on where you can go and who you can see.  Keeping in mind my $98,000 per year, you can see how you’ll lose your home, your car, probably your source of income, your portfolio then file a Chapter 7.  All this as you agonized over the life or death of a dear loved one or yourself.  That image up there, the one with a belly full of cancer?  It could just as easily be you.  Or your child.  Or your grandchild.

What would you think of me if I shat on you, telling you I don’t want my hard-earned money paying for your health care?  This mind-set that people who are poor or sick or both, deserve their lumps, well it must change.  It’s fucking-up our country.  It is preventing us from showing mercy.  It’s turning us into curmudgeons and making us miserable in the process.

I gotta tell you, if you haven’t got your health, you’ve got nothing.  Should I begrudge you your health because I think you a sinner who’s bad choices have brought disaster on you.  Should I dismiss you saying  “I don’t want my hard-earned money . . . “.   No I shouldn’t and you shouldn’t begrudge me mine.

Goddammit, we’re Americans.  This unkind, ungenerous and condemnatory spirit has become the order of the day and it curdles the soul.  It is a blight on the country and it must be exorcised.  We need to give life and health to all our countrymen, ourselves included.  We need what all decent countries provide and that is healthcare for all.  Sin or no sin.  Money or no.

The battle must stop.